The historic Herff Farm is undergoing major changes in 2014.  Since the Herff Farm was purchased by the Cibolo Nature Center in 2007, plans have been ongoing to determine how best to use this historically, culturally, and ecologically-important resource to best serve the Hill Country.

Currently, the property is in use as a Farmers Market (The Farmers Market at the Cibolo), a sustainability education center, and a historical site.  Special events take place at the Farm, including a recent Texas Band of Lipan Apache blessing, signifying the goodwill that has existed for a century-and-a-half between the Herff family and the Lipan Apache who originally resided in these hills.

Many changes have been made since 2007; changes that are visible during any Saturday-morning trip to the Farmers Market at the Cibolo, held on the Herff-road frontage property.  The Herff Farm Homestead was in serious disrepair, but historically-accurate renovations have brought the outside back to its original glory.  The formerly failing exterior walls were rebuilt stone-by-stone.  A new roof was recently added.  Modifications made to the home in the 1970’s were removed, in order to preserve the look and feel of the original home.  The historic Herff Homestead will serve as a Visitor and Event Center for the Herff Farm campus.

Check back here often to learn about our newest projects.  From permanent restrooms to riparian restoration, from a new roof to new roads, this page will provide updates on all the latest developments. 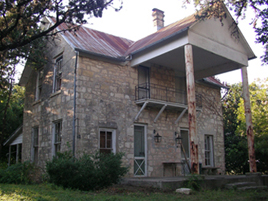 In a change from the original porch exterior which included a large "sleeping porch," to be used when summer temperatures inside the house were unbearable for slumber, renovations in the 1970's included the addition of steel columns and a much smaller balcony. 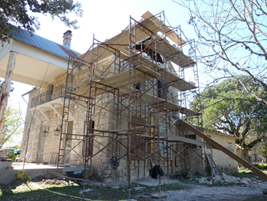 One of the first steps to preserve the home was an emergency stabilization process for the exterior walls, which were failing, threatening to fell the entire house. 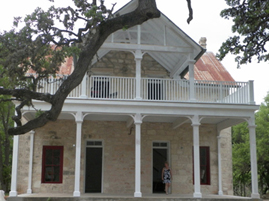 Many dedicated hours of reconstruction have brought the exterior of the house back to its former glory. 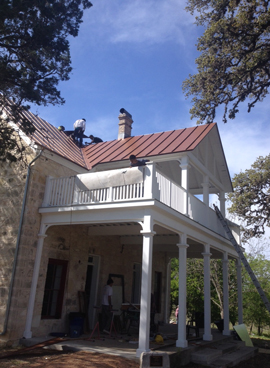 A recently completed metal roof is the final step in preserving the exterior of the historic homestead.

Located at the confluence of the Cibolo and Menger Creeks, the Herff Farm is an ecologically delicate and important area.  The creeks are responsible for helping to provide fresh water to citizens of Boerne, the Hill Country, and San Antonio.  With some help from our friends at REI -San Antonio, the Cibolo Nature Center & Farm worked to shore up the banks of the creek and restore native plant life to the area. 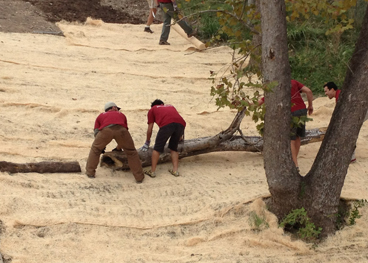 During the ecological restoration of the Menger Creek, volunteers from REI - San Antonio place a special fabric designed to reduce erosion and help seeds grow. 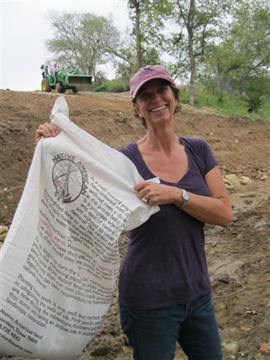 Native and Heirloom seeds were gathered from the Native American Seed Co. for the project.

With an expected completion date of late 2014 for the road beds immediately outside the farm, the Herff Road expansion will increase ease of access for visitors.  A tree-lined boulevard and water-smart construction techniques will provide an enhanced experience for the citizens of Boerne. 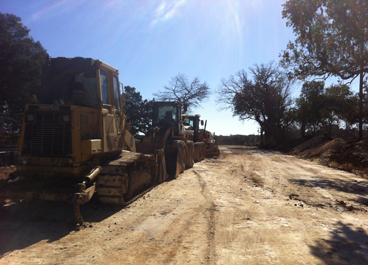 Large machines at rest just outside the Herff Farm gates will soon be done with their work, heralding yet another new era for the Herff property.

Other Changes on the Horizon...

The historic homestead's interior renovation began in February this year and is expecetd to be finished in late July. After the recent annexation of the farm property into the City of Boerne we are preparing to hook into City utilities to supply water for both the homestead and free standing bathrooms, both of which will also be supported by a septic system now in the final planning stages. Finally, planning is underway to build a large acre plus sized garden in the farm property's north field to enhance our educational programs and further support our mission. This garden should be in place at the end of this year or early in 2015.

Currently, we are in the process of completing Phase II of the Master Plan with Ten Eyck Landscape Architects to include trails, parking, signage, gardens, building restoration, new gathering places, and demonstration sites.